Are there medicines I should avoid if I am taking fibrates to lower my cholesterol?

Fibrates, like gemfibrozil and fenofibrate, are medicines used to lower triglycerides. They also can raise your HDL (good) cholesterol. This may help lower your risk of a heart attack or stroke. Tell your doctor all the medicines you are taking. 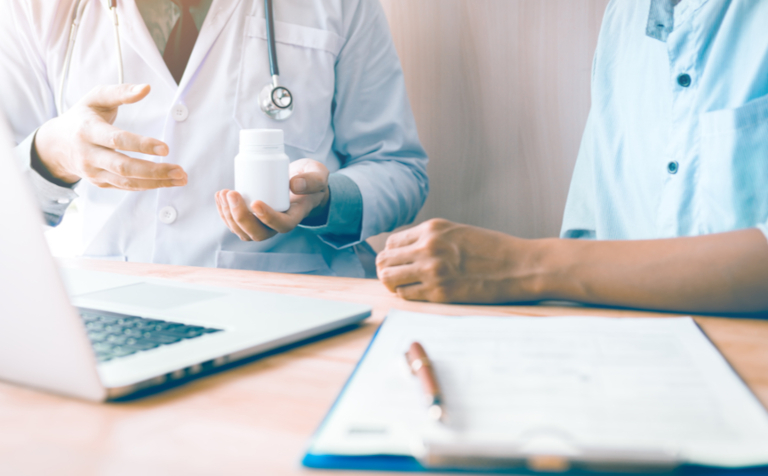 You need to be careful when taking some medicines when you are also taking fibrates. They include:

Statins. Simvastatin and lovastatin should be avoided when taking gemfibrozil. When taken together the risk of muscle problems increases.

Ezetimibe. Taking ezetimibe with fibrates may increase the chance of getting gallstones.

Oral Diabetes Medicines. Taking fibrates with some medicines used to treat type 2 diabetes, such as repaglinide (Prandin), may cause your blood sugar to drop too much.

Warfarin: the dose of warfarin, used to prevent blood clots, may need to be adjusted when you take fibrates to prevent excessive bleeding. The doctor may need to check your blood clotting time more often when these medicines are taken at the same time.

Colchicine. Gout may be treated with colchicine. When colchicine is given to someone taking fibrates, there is a risk of a muscle disease called rhabdomyolysis, so it is best not to take them at the same time.

Bile Acid Sequestrants. Medicines like colesevelam, colestipol, and cholestyramine that are used to lower cholesterol should be taken 4 hours before or 4 hours after you take a fibrate. This helps both medicines work best.

Tell your doctor what you take so you don’t make a mistake!

Next Topic »
What type of meats should I avoid to lower my risk of heart disease and cancer?
email     facebook     twitter

Fibrates are a class of medication recommended to treat elevated triglycerides (TG) and low levels of high-density lipoprotein cholesterol (HDL-C) in order to lower the risk of cardiovascular events, like heart attack and stroke.1,2 Fibrates approved for use in the US include gemfibrozil and fenofibrate.3–5

Drug-drug interactions can occur between fibrates and other medicines. Gemfibrozil is metabolized by the CYP450 enzyme system, and other drugs that are metabolized in the same pathway may be affected when the drugs are taken together.6 This includes the co-administration of gemfibrozil with certain statin medications, such as simvastatin and lovastatin, for patients with hyperlipidemia. When these drugs are given together, excess levels of statin can result, leading to an increased risk of statin-associated myopathy.7 Fenofibrate generally does not interfere with most statins and is the preferred fibrate to use when statins and fibrates are both indicated.8

Evidence about the safety of fibrates when co-administered with ezetimibe is incomplete. Because fibrates and ezetimibe both increase the risk of cholelithiasis, the effect of co-administration has been studied.7,9,10 McKenney et al. conducted a randomized, double-blind placebo-controlled study of 576 patients over 48 weeks who took either ezetimibe 10 mg, fenofibrate 160 mg, the same drugs in combination, or placebo.11 The study results reported 1 planned or performed cholecystectomy in the 236 patients receiving fenofibrate alone (0.4%), compared with 4 planned or performed cholecystectomies in the 340 patients receiving the combination (1.2%), a difference that was not statistically significant. However, individuals with a history of gallbladder disease were excluded from the study, and the study was considered too small in retrospect to evaluate the gallbladder disease risk. The ezetimibe package insert warns against co-administration of ezetimibe and fibrates other than fenofibrate. 12 Fibrates are contraindicated in any patient with a history of gallbladder disease.4,5

Bellosta et al. reviewed what is known about fibrates’ interaction with PCSK9-inhibitors.13 Compared to monotherapy with alirocumab, a combination of alirocumab and fenofibrate results in a 35% lower plasma concentration of alirocumab. However, this drug-drug interaction is not a contraindication to combination therapy, and its therapeutic goal of low-density lipoprotein cholesterol reduction is maintained when the drugs are co-administered.

The manufacturer’s package insert for gemfibrozil specifically recommends against the concomitant use of gemfibrozil with repaglinide, another oral diabetes medication that is not a sulfonylurea, due to potential hypoglycemic effects.3 While other hypoglycemic medications are not listed as specific contraindications for the use of fibrate therapy, the elevated risk of severe hypoglycemia should be discussed with patients taking both medications.3-5

The manufacturer’s package inserts for gemfibrozil and fenofibrate also recommend caution when co-administering with anticoagulants, specifically warfarin.3-5 Dosage adjustments of the warfarin and frequent prothrombin testing may be needed to achieve the desired prothrombin level to prevent bleeding complications.

Cyclosporine and other immunosuppressants can lead to renal toxicity when given in combination with fenofibrate.4,5 Benefits and risks of combination therapy should be weighed, and the lowest effective dosage of each drug employed. Caution should also be employed when co-administering fenofibrate with colchicine as cases of rhabdomyolysis have been reported when these drugs were given together. Bile acid sequestrants can bind to some drugs when given simultaneously. For this reason, it is recommended that fenofibrate be given one hour before or four to six hours after a bile acid sequestrant.