How long does it take for statins to lower my cholesterol?

For most statins, you should see the cholesterol-lowering effects within six weeks of starting the drug. Some work even faster. Your doctor can check your cholesterol levels to see if you are getting the desired effects. If needed, they can adjust your dosage to lower your cholesterol even more. 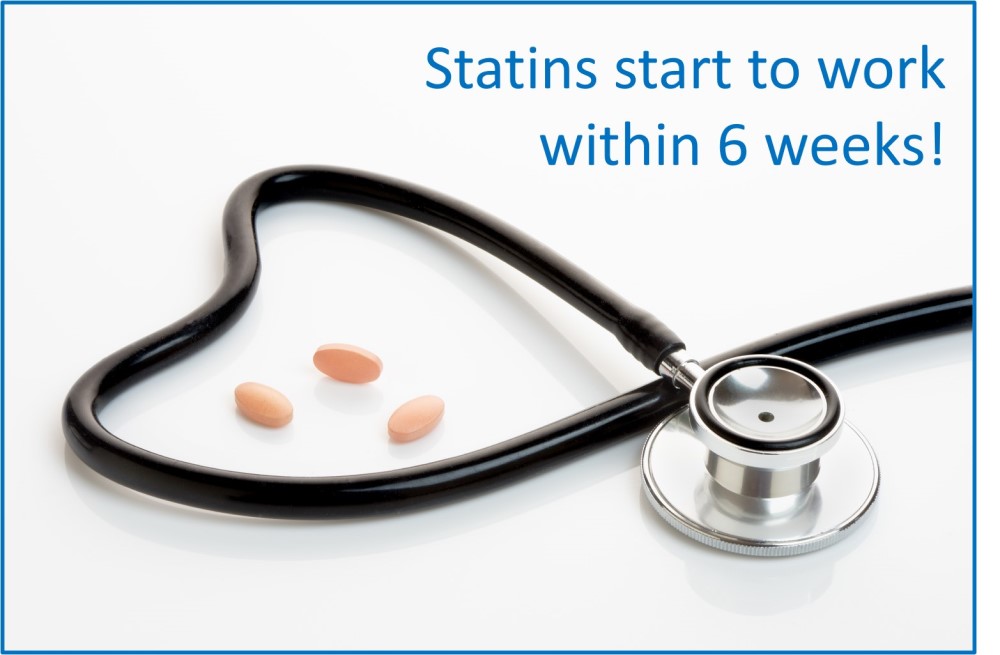 If lowering cholesterol is what you seek, statins start to work within 6 weeks!

Manufacturers’ package inserts for six of the seven statins, which are approved for use in the US, report that their lipid-lowering effects are apparent within six weeks of initiating the drug.1-7 Different statins reported variable responses within that time frame. In some cases, the differences varied by the clinical study design and the frequency of lipid measurements. Clinical trials were conducted on individuals with familial hypercholesterolemia as well as non-familial primary hyperlipidemia before the drugs’ approval. Fluvastatin trials reported an unspecified therapeutic response that was evident at two weeks and the maximum response was achieved four weeks after the drug’s initiation.3 Pravastatin trials reported therapeutic response after one week and a maximum response at four weeks.1 Simvastatin achieved maximal response between four and six weeks.5 Atorvastatin6 and rosuvastatin7 reported lipid-lowering effects after six weeks, without reference to minimal or maximal therapeutic response. Lovastatin achieved a “near maximal” response after four weeks.4 Pitavastatin reported clinical efficacy at 12 weeks and it is not clear if therapeutic response occurred prior to that reported measurement.2

The rosuvastatin package insert recommends starting therapy at a lower initial dose for Asian patients in response to another pharmacokinetic analysis conducted during the clinical trials.7 Asian volunteers had a two-fold higher Cmax and AUC of rosuvastatin compared to Caucasian controls. While the prescribing information reports there was no clinically relevant difference among Caucasian, Hispanic, Black, or Afro-Caribbean participants in the clinical trials, clinical data for Asians is not reported.

These pharmacokinetic studies are conducted to guide dosage recommendations but may point to small differences in clinical response to drugs among different populations, as well as possible genetic differences in patient responses to statins. Egom et al. discuss ethnic differences in statin biochemistry.8 The authors point out that some statins are metabolized by enzymes in the CYP pathway which vary in their distribution among different ethnic populations. For example, CYP2D6 is absent in 7% of Caucasians and African Americans but the deficiency is rare among Asians. Naito et al. further described racial differences in cholesterol-lowering effects of statins.9 Their study of 14,000 people with hypercholesterolemia compared Chinese versus Westerner responses to rosuvastatin or atorvastatin on LDL-C. They found that to achieve a greater than 40% reduction in LDL-C, Asian patients required significantly lower doses than Western patients (respectively, 18.9 mg vs 80 mg of atorvastatin or 14.1 mg vs 40 mg rosuvastatin).

In summary, clinical trials conducted before statins were approved suggest that one can expect to see cholesterol-lowering effects within the first six weeks of statin treatment. However, studies that have been conducted since then suggest there may be some variability in that response. With the exception of prescribing recommendations for rosuvastatin in Asians, 7 the variability has not resulted in differences in prescribing guidelines.

It is important to note that reduced cardiovascular disease outcomes are measurable somewhat later, but often within six to twelve months of initiating statins.10 The 2018 Guidelines on the Management of Blood Cholesterol recommend that lipid levels be measured four to twelve weeks after statin initiation to guide ongoing treatment.11